So You Want to Make a Change? 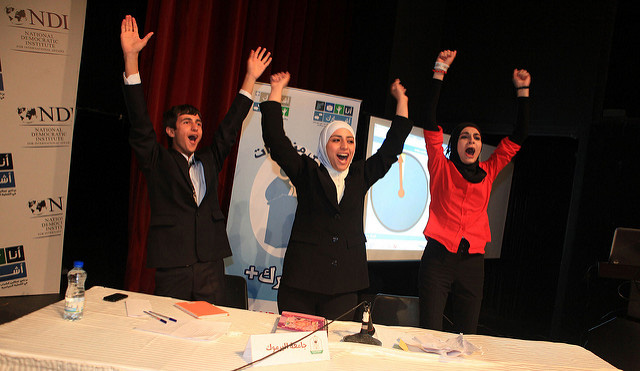 As described on the About this Tool Box page, this site provides practical guidance and resources for young people who want  to make positive change in their communities through organizing and activism. This work takes place through a series of coordinated actions called a campaign.

When you have committed to lead a campaign for community change, there are several key concepts to consider before planning your campaign.

It may be difficult to talk about power at times. The subject can make people uncomfortable or even scared. But as a person who wants to make change in your community, it is important to illuminate the many ways in which powerful interests shape the way we live. We also need to uncover how citizens can work together to develop a different kind of power to make the changes we want to see. It is important to realize that the reason why things are the way they are is often because it is in the best interest of powerful people or groups. There are many ways that they may try to maintain power–control of government, demonstrations of force, and access to money or wealth are a few obvious ones. But even though it may seem impossible to take action when facing such powerful forces, you can strengthen your own ability to exert influence and open up possibilities for changes that will improve your community. You have to be ready to join forces with others who have similar goals to take action collectively. You also need to develop your own knowledge and confidence, and that of your fellow activists, so that each member of the group feels ready to take on the challenges of change.

It can be helpful to consider three different forms that power can take – visible, hidden and invisible. Visible power refers to contests over interest which are seen in public spaces or formal decision-making bodies. For example, this includes decisions made in legislatures, local government bodies, local assemblies or consultative forums. Hidden power is used to vested interests or maintain their power by creating barriers to participation and excluding the public arena.  Examples of this type of power include decisions made by elites or political leaders behind ‘closed doors’, without public consultation. Invisible power, is how dominant ideologies and values affect people’s awareness of their rights and interests. This refers to contexts where people may be unaware of their rights or ability to speak out, and may come to see dominant forms of visible and hidden power as natural, which therefore go unchallenged or unquestioned. You may encounter one or all three of these types of power in your campaign.

As a young person with a vision for a better community, you have already established a foundation for your activism. Although you may not possess wealth or government control, you have the ability to imagine the change that you want to see, even if it requires some struggle. Your ideas can spark a process to bring important changes in your community.

You may be disregarded by adults in power due to negative stereotypes about your age and level of experience. You may find that some leaders claim that they are being inclusive of young people, but this may only amount to casual interactions at their discretion. This is particularly common in formal politics, and can often lead young people to be discouraged, frustrated and alienated. As a young leader, it is up to you to help others combat feelings of apathy or disengagement with a sense of urgency, hope, solidarity and the feeling that they can make a difference.

Leaders are people who provide a vision to inspire and motivate others to work towards a common goal. A leader can come from any walk of life. You probably have already taken some important first steps that are essential to effective leadership. You have identified a problem or change you would like to see in your community. Maybe you have even already started taking action to address it. But, as we’ve discussed, you probably won’t be successful on your own–you have to motivate people to work with you.

It may seem at times like an uphill battle, but, as a citizen, you have the ability to shape your community by attempting to influence decision making by elected leaders and public officials. But you shouldn’t try to go it alone. The key to achieving such change is bringing citizens together around a common vision and working in a coordinated fashion to achieve it.

For more information on issues related to age discrimination and youth leadership, and guidance on how to cope with them, you may refer to the below resources:

When it comes to making change, you can rarely accomplish your objectives on your own. Think about the issue or problem that is calling you to take action. How does this issue affect other people in your community? How can you encourage them to join your efforts? Why is now the time to push for change? You may find that others are discouraged from previous failures or lack confidence in their own abilities. As a leader, it is up to you to motivate them to participate and stick with it for as long as it takes to achieve your objective.

By working with other people, you wield more power than you would have if you acted alone. One benefit of collective action is the demonstration of popular support it brings to your issue. If organized, groups of people can use their numbers to pressure those in power to support their priority issues. The other, perhaps more important benefit is that by working together towards a common goal, citizens develop ties, sometimes called social capital, with others, which may serve to energize and unify communities, and encourage them to remain active over the long term.

Leadership teams may provide the best framework for helping people work together. An interdependent leadership team will help to strengthen relationships among the activists. It will also ensure that the campaign doesn’t suffer from having only one overworked leader or lack direction as a result of having too many people in charge. In an interdependent leadership team, community members each take on some responsibility, but no one person has the power to dominate the whole group. In this framework, the organizer (that’s you!) is charged with identifying others who are committed to similar change goals to play leadership roles on different aspects of the campaign.

Preparing for a Campaign

This tool box emphasizes different points in the process of planning a campaign and putting it into action. Proceed to the next section, Campaign Strategy and Planning, to begin planning your campaign.

About This Tool Box